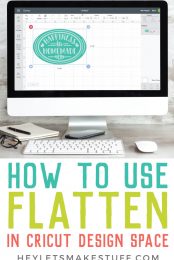 Using Flatten in Cricut Design Space makes it possible to turn any cut file into a printable image for Cricut Print then Cut. Here’s how to use Cricut Flatten, plus a few tips and tricks for making the most of this tool.

If you want to use Cricut Print then Cut, you’ll need to know how to Flatten your images!

Flattening turns a cut image into a printable image to use with your Cricut.

Cricut Flatten is one of the five tools at the bottom of the Layers Panel on the left. You can read the other tutorials here:

The Flatten tool is used in projects with the larger current Cricut machines, including Cricut Maker and Cricut Explore. It will NOT work with Cricut Joy because Cricut Joy does not have Print then Cut capabilities.

Where is the Flatten Tool in Cricut Design Space?

On desktop (Mac and PC), the Flatten tool is found at the bottom of the Layers Panel on the left. It’s the icon that is second from the right, the two squares being flattened with an arrow.

On mobile (iOS and Android), the Flatten icon is under the Actions menu. It is also two squares being flattened by an arrow. You need to scroll a bit to the right to see it.

It’s a very robust feature of Cricut Design Space and you can learn more about it in my Ultimate Guide to Cricut Print then Cut!

There are three primary ways to go about creating a Print Then Cut image.

There a few things to know about using the Flatten button, so double check you understand these rules:

How to Select Images to Contour

If you’re unfamiliar with selecting a single image in Design Space, you have a few options. In the Design Space Canvas screen:

Using Flatten to Create a Print Then Cut Image

Let’s take a look at an example. Say I want to make a gift tag. I have a circle from the Shapes menu and this cute Happiness is Homemade image (#M1B4DB126).

I could cut out the Happiness is Homemade from iron on vinyl or adhesive vinyl, and spend far too long trying to get all those pieces transfer to the oval. Or, I could just flatten and print the gift tag using Print then Cut!

Place the text image over the oval and select both. Then click Flatten in the lower right menu. The black outlines around the text image and oval will disappear, and you will notice that in the layers panel you now have a Print then Cut layer under the heading “Flatten.” They will hold their size and position when you Print then Cut.

When you hit Make It in the upper right corner, instead of your normal cutting screen, you’ll see a Print then Cut screen with your image shown on a cutting mat. Design Space will direct you to print your image on your home printer. It will have a black registration border around it when it prints. Then when you go to cut it, the Cricut Design Space will use that registration line to know exactly how to cut around the edge of the circle perfectly!

What is the Difference between Flatten and Attach on Cricut?

Flatten creates a printable Print then Cut image, whereas Attach keeps the same layout of your images on the mat as they are on the Canvas.

What is the Difference between Flatten and Weld on Cricut?

Why is Flatten not an option on Cricut Design Space (Grayed Out)?

If you can’t click the Flatten button, you may have one of the following problems. First, you may only have one image selected—you can only flatten two or more images. Second, your image may be an operation type that can’t be flattened, like scoring or foiling.

Hope you learned a little more about the Flatten tool today! Have questions? I’d be happy to answer them in the comments!