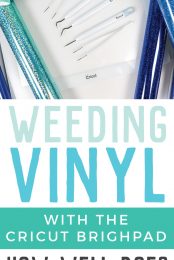 The Cricut Brightpad is designed to help make weeding vinyl easier. We put it to the test—here’s how it fared on more than a dozen different adhesive and iron on vinyls!

How Well Does the Cricut Brightpad Work for Weeding Vinyl?

Alongside the Cricut Maker (yay!) and the Cricut EasyPress (woohoo!), Cricut launched one more crafting tool in the summer of 2017—the Cricut Brightpad.

The Brightpad is Cricut’s crafting light box. Of course, as they do with all of their products, they took a traditional light box concept and “Cricut-ized” it, making it easy to use and durable. Let’s take a look at the actual Brightpad, and then I’ll put a variety of materials to the weeding test to see if the Brightpad really does make weeding easier.

In the Cricut Brightpad Box

The Brightpad box contains just a few items: the Brightpad itself, a long 6-foot power cord (with plug), and a product information guide. Set-up is simple—just plug the cord into the Brightpad on one end, and into the wall on the other. Press the power button and you’re up and running!

The Cricut Brightpad Itself

The Brightpad has just three buttons—a power button, and + and – buttons, which change the brightness to one of five settings:

The LED light, particularly on the highest setting, is really bright. The lit area on the Brightpad is 9″ x 11.5″, which is large enough for most projects. The overall dimensions of the Brightpad are 13.375″ x 10.875″. It only weighs about 1.75lbs, much lighter than many of the lightboxes on the market.

I like that it is ultra-thin (.35″)—I find it comfortable to use. I think a thicker lightbox would bother my wrist and arm.

The Brightpad is also hard to break. Literally, on stage at the release event, Cricut CEO Ashish Arora just threw the Brightpad aside on the stage and it worked just fine after he picked it up. As a mom of littles, I appreciate the durability and won’t hesitate to let my boys use it for art projects in the future.

Using the Brightpad to Weed

One of the biggest frustrations I hear from my readers is the difficulty in weeding adhesive and iron-on vinyl for projects, and I imagine that Cricut hears the same. It can be really difficult to see the cut lines, particularly on materials like glitter iron-on vinyl. The Brightpad is meant to address this frustration.

To use the Brightpad to weed, simply place your cut project with the carrier sheet side down (cut vinyl side up) on the Brightpad. You’ll see that the light shines through the cut lines in your vinyl. You can adjust the brightness of the light using the + and – buttons on the Brightpad. I find that turning down the ambient light in the room helps a bit—let that light really shine through your project!

Then pick up your weeding tool of choice. I like using the Brightpad alongside Cricut’s weeding toolset, which comes with two weeding tools (my favorite is the classic weeder), two pairs of tweezers, and a piercing tool. If you’re weeding intricate projects, having a range of tools at your disposal can make things easier! I also like having a straight pin for picking out the tiniest of pieces.

Then dig your weeding tool into some of the “negative” space (the vinyl you do not want on your finished project) and pull up.

Do this for all the negative space on your project. Want specific tips? Here’s more about weeding adhesive vinyl and weeding iron on vinyl. Using the Brightpad is just one of the things that can make weeding vinyl easier—check out those posts for more helpful tips and tricks.

How Well Does the Cricut Brightpad Work for Weeding Vinyl?

Now let’s put this Brightpad to the test. I selected a variety of different adhesive and iron on vinyls to weed using my Cricut Brightpad. For each vinyl sample, I cut a small triangular design and then photographed them both from the top and from the side. I took these images carrier-side up so that you can more easily identify each of the materials, but the light shines through the same on both sides.

Let’s see how they fared.

Iron on vinyl is actually so much better than these pictures show. There was something about this dark teal vinyl that made it photograph poorly. The Brightpad is GREAT for weeding regular iron on vinyl—easy to see cut lines make it a cinch.

Foil iron on vinyl is also better than it looks in this photo—you can see those lines in the angled shot. Flipped over, you can actually see the cut lines in the foil fairly easily, even without the Brightpad, making this one easy to weed.

Holographic sparkle iron on vinyl is a little tougher, though you can really see the cut lines from an angle. Despite it looking difficult, it’s still fairly easy to weed with the Cricut Brightpad.

The patterned iron on vinyl was the biggest shock for me. Even up close I couldn’t see my cut lines at all, with or without the Brightpad. I held up the piece of vinyl to the light so I could see where my cut lines were and weeded it that way. Definitely the hardest of the entire bunch.

Adhesive vinyl shows the Brightpad at its best. Clear cut lines from any angle. The Brightpad is definitely a sanity saver if you’re working with regular vinyl regularly!

Matte foil vinyl is also a star—with the Cricut Brightpad it’s really easy to see these cut lines and it makes weeding this material super simple.

Weeding holographic vinyl is easier than it looks here—the holographic pattern really throws off my lens. You can see from the side angle that the cut lines really shine through at the right angle. Rotate your project as you’re weeding to find that good angle and it’s not difficult to weed.

One of Cricut’s newer products is this textured metallic vinyl. It feels very thick, so I was pleasantly surprised to see how well the Brightpad worked.

Glitter adhesive vinyl is another material that can be a real struggle to weed. The Brightpad definitely comes in handy here—it’s not as clear as some of the others, but a definitely improvement over going at it without the Brightpad.

After the patterned iron on, I didn’t have high hopes for the patterned adhesive vinyl. Thankfully, though, the Brightpad did a great job illuminating the cut lines through the pattern. Definitely makes it easier when it comes to weeding because that pattern can really throw your eyes off!

Overall, I was impressed with the Cricut Brightpad’s ability to make weeding easier for most materials. It doesn’t make it EASY in some cases, but it definitely helps, particularly if your eyesight isn’t the best.