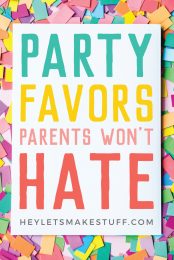 If your kid has ever received a whistle, a bunch of little sticky hands, or, God-forbid, a goldfish, you know that goody bags can easily go wrong! Instead, here are a birthday party favors parents won’t hate but kids will love!

I recently threw our boys’ third birthday party! We themed it after the book Dragons Love Tacos. I wanted to hand out a simple party favor bag to all the kids at the party on that special day, so I took an informal poll of my Facebook friends to ask which birthday party favors they liked and which they just hated. Here’s what I found out!

Do I Need Goodie Bags?

Nope. Nope, nope, nope. You definitely don’t need to hand out goody/goodie bags or party favors at your celebration. If budget is a concern, you have concerns about the environment or food allergies, or if you just don’t want to do it, don’t.

Let’s stop doing the things that we feel we must do, okay? And then let’s agree not to judge each other!

But if you want to put together party bags, don’t feel bad either! I think it’s fun to send kids home with a little memory of the event. We had cute little dragon bath toys in ours and my neighbor said her daughter has had so much fun playing with them every night since the party.

You could also opt to make a small donation for every child at the party to a charity that is close to your family. This is also a good alternative if you don’t want party guests to bring gifts—give them the option to donate to charity in honor of the birthday child.

How Much Should I Spend on Birthday Party Favors?

Kids’ parties are expensive, even if you’re just looking at party essentials like a cake, plates, and a little decor! I can understand why goody bags are so controversial. Why spend even more money on a bunch of crummy little toys that will probably end up in the trash in a few days?

For our favor bags, I ordered in bulk and spent less than $3 for the bag and two small toys that I included in the bags. Don’t go over the top with party favors—you don’t want to spend more on the favors than people might spend on a gift for your child!

Where to Shop for Party Favors

There are a lot of places you can shop for party favors that parents won’t hate. I like going into my local store, but you can also order online:

So what did the parents in my poll consider bad party favors? Here were the ones that topped their hate list:

Let’s also talk about sweet treats. Treats were hit or miss depending on whether or not the party guest had food intolerances and the parent’s lifestyle preferences for things like sugar consumption. Some ideas treat ideas that parents liked included:

And finally here are the great party favors that the majority of my friends didn’t mind their kids coming home with!

Party Crafts instead of Goodie Bags

One of the fun things one mom mentioned was that she liked when her daughter brought home a craft she made at the party as the favor. It was a good combination of party activity, creativity, and goody bag!

Sometimes the decorations for your party make great favors. Here are a few ideas

It’s a fun way to get both decorations and party favors out of a single item!

What are the best (or worst!) party favors your kid has ever brought home? Let me know in the comments!