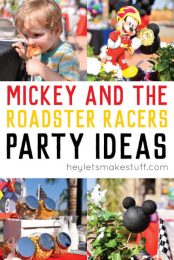 Get inspired with these Mickey and the Roadster Racers party ideas, including games, food, and decor! Everything you need to throw a fun Disney Junior party for your kids.

We were invited to this Mickey and the Roadster Racers party, sponsored by Disney Junior!

Pretty much every kid I know has an obsession with one thing or another. For one it’s dinosaurs, another it’s princesses, and another it’s blocks.

My boys? Cars. Give them all the cars, all the time. They have tons of toys, but most often you can find them playing with their cars, looking out the window at cars, reading books about cars, or watching a TV show about cars. Dad’s a car guy, so it makes sense, but even I’m surprised how much they’ve taken to playing with cars.

Any good party has food, and this was no exception! We were treated to so many fun snacks at the party, and my boys couldn’t stop eating! Their favorites were Goofy’s Pancake Pops, which were small pancakes on sticks with powdered sugar and dipping sauces. Perfect for little hands!

We also tried Daisy’s Breakfast Sushi (bananas coated in cereal) and Donald’s Spare Tires (chocolate donuts). There were also a ton of cereal options, which made my boys happy! Head on over to the Disney Junior website to download some of these printables, including these checkered flag cup wraps, popcorn cones, and juice box wraps! Visit their Pinterest page for even more ideas.

We were greeted at the party by a giant Mickey balloon archway. Totally cool, but perhaps a little out of the ordinary mom’s wheelhouse. (Though if this is in your wheelhouse, mama, rock it!)

Kids, thankfully, love balloons of all types — just blow up a few, with helium or even just regular air, and your kids will love them. Pick bright colors that play off the Mickey and the Roadster Racers theme — red, yellow, white, blue.

The tables were decked out with Mickey and his friends, as well as Styrofoam Mickey heads spray painted black. A super easy DIY!

Just use two different sizes of Styrofoam balls connected with heavy-duty toothpicks, and then spray paint matte black! Add a skewer at the bottom for use in a flowerpot or vase.

Other ideas for decor include plastic flag banners, checkered flags, orange cones, and even rubber ducks as a nod to Donald Duck.

If you head on over to Disney Junior you can also download a bunch of party planning printables and get other fun ideas. And don’t forget the favors — Mickey cookies and a little trophy in a fun hot rod!

It’s pretty hot here in Northern California, so the DIY carwash was a BIG hit with all the kids! Made from PVC pipes, sponges, pool noodles, and plastic streamers, it was a super fun way to cool off after running around in the sun. I could see setting this up at the beginning of the summer in your backyard so your kids could enjoy it for months!

Sebastian only wanted to run through it when it was dry — though he thought the sponges were the best thing ever. Ha!

There was also a kiddie pool with plastic tires and balls — another great place to cool off. By the end of the warm morning, at least half the kids were in this little pool! (And I’m pretty sure every parent was wishing they were in there too!)

Though it’s not a game, one of my favorite ideas were these Happy Helpers charts. My boys are right at the age where they LOVE to help, so these are going to be perfect! You can download the chart here, and then laminate at home so you can reuse it each week!

We’re watching new episodes of Mickey and the Roadster Racers, as well as a few of their other favorites like Puppy Dog Pals and PJ Masks. The boys race their cars up and over the furniture while watching, playing along with the races on the show. I think we’ll be having our own breakfast sushi, too, since they love bananas almost as much as they love cars!

This is a sponsored post written by me on behalf of Disney Junior.