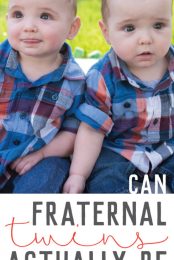 Does everyone tell you your fraternal twins look identical? They might be! We did a twin zygosity DNA test to learn whether or not our twins were fraternal or identical. Here are the results!

When we found out we were pregnant with twins, our doctor told us they were fraternal. They had two separate sacs and two separate placentas — no medical mystery here. We assumed that was correct and just went with it.

When the boys were born, we thought they looked quite different, and it was generally easy for us to tell them apart. It probably also helped that for three and a half weeks they were in their own NICU pods (they were born early at 32+5 weeks). But Sebastian weighed nearly a pound more than Callum, their faces were shaped differently, and the shape of their ears was quite different as well.

But as they got older, we realized that they only looked different to people who knew them well — close family and friends who saw them often. Most strangers would say, “Oh! Identical twins! How fun!” And I’d have to do the song and dance about how they were actually fraternal and use the word “placenta” too many times for a conversation with a stranger. Even Ryan and I would mix them up sometimes, and it would always throw us off.

So we wondered: can fraternal twins actually be identical?

Fraternal twins who end up being identical is a small, often-debated percentage — between 3% and 20% usually. Here’s how it happens. (This is a basic lesson in twins — there are actually seven types of twins but I’ll leave it to the professionals to explain them all).

Fraternal twins are the result of two eggs being fertilized by two sperm. The zygotes implant separately, meaning each baby ends up developing their own sac and placenta. Fraternal twins can be boy/boy, boy/girl, or girl/girl.

Identical twins are the result of one fertilized egg splitting. The split usually happens around days 4 or 5, after the placenta and sac have started forming. Which means the two babies end up in the same sac, sharing the same placenta. Identical twins are always boy/boy or girl/girl.

But if that egg split happens on days 2 or 3, before the sac has started to form, each zygote develops its own sac and placenta. What looks like fraternal twins to medical professionals is actually identical twins!

The only way to figure this out for sure is to do a DNA test. Fraternal twins will have similar DNA like in regular siblings, whereas identical twins will have identical DNA markers. You can get a test at Easy DNA. They sent us the testing kit and we swabbed each of the boys’ cheeks four times and sent in our samples. The turnaround time was quick and soon we had an envelope in the mail with the test results!

Even after all the times we’ve confused the boys and all the comments from strangers, I was still 90% sure my boys were fraternal. So was Ryan and so was pretty much everyone who spends time with them. An informal poll on Facebook had my friends split about 50/50 whether or not they were identical.

Our boys are IDENTICAL!

I am still shocked. I was sure they were going to be fraternal! Their personalities are so different, and I can see so many physical differences between them. But the DNA test doesn’t lie.

This also explains (sort of) a little more on why we had twins at all. Fraternal twins are the type to run in families — but we have no twins anywhere in my family’s line. Identical twins are, well, freaks of nature and don’t run. Having this weird miracle somehow makes a little more sense to me than having fraternal twins.

Are you a twin mom? Have you had your twins tested? I’m curious to see what your results are!